Tamil name: Pilacchivalli, yanai-t-tatippu. Spatholobus genus belongs to the pea family and consists of large lianas which are of South East Asian origin. S parviflorus closely resemble Butea monosperma (Plash tree) in general appearance. S. parviflorus is a very large woody liana and has extensive distribution all over India. The large leaves are trifoliate and asymmetric. The leaflets are ovate, obtusely acute at apex and have a rounded base. Flowers are borne in densely hispid panicles; they are whitish-purple in color and are fragrant. The fruit is a non-dehiscent pod bearing one apical seed. Although the flower has many ovules only one is allowed to develop into a seed. The bark of the plant is used to make fiber. The gum extract is a powerful astringent. In Bengal the gum obtained from the plant is used to make dyes. The plant has various medical applications. This plant was encountered near Malampuzha dam in Palakkad district of Kerala. It is also seen in Kallar, situated in the foothills of the Nilgiris. It is a beautiful large liana and can tower over other vegetation around it. The branches travel great distances by crawling and looping over other vegetation often giving rise of strange knotted structures in the forest floor. The beauty of the flower is rarely appreciated because they mostly occur high up in the canopy. The plant is a preferred choice for foraging by Elephants. There is a need to perverse and propagate this plant in forest areas. 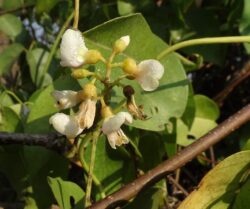